[1] Cage says there is no such thing as silence. If so, what is silence? Is silence sound? Noise? Music?
In 'Weltenlärm, Schweigen, Stille', Thomas Macho asserts that the modern world has become much louder (acoustical pollution). This would be partly due to the extensive industrialization of our society. On the other hand, our world has become more musical as well: the omnipresence of music suppresses and neutralizes noise (as undesirable sound). Macho believes that the musical avant-garde of the 20th century responds in three different ways to this twofold acoustical expansion, two of which are relevant here. First, the dismantling of tonal relations by the Second Viennese School has prepared and enabled an invasion of noise on the musical world. In other words, the battle against tonality has also been a battle against the suppression of noise by and in music. (A strange situation occurs. Noise is suppressed by noise. Noise outside the domain of music is suppressed by noise - that can contain the same sounds - within music.) Second, the composers from the Second Viennese School set out to explore the effect and the functioning of silence. According to Macho, the focus on silence constituted a new music. He (understandably) mentions Cage's composition 4'33'' as an example par excellence. (listen) . A composition in three parts where each movement is to be played according to the simple instruction 'tacet' (be silent).

[2] In complete accordance with tradition, Macho puts these two concepts (noise and silence) in near diametrical opposition to each other. However, it is precisely Macho's example - 4'33'' - that can be understood as undermining this seeming opposition. After his experiment in the anechoic room, Cage concludes that both the sounding and the silent parts in a piece of music are filled with sound. (Inside a soundproof room, Cage still heard two sounds - his blood flow and his heartbeat, and this brought him to the realization that silence does not exist.) He believes it is ignorant to think that sound has silence as a clearly defined opposite. According to Cage, silence is all the sounds that we do not intend. Silence means the entire range of sound. 'There is no such thing as absolute silence. Therefore silence may very well include loud sounds and more and more in the twentieth century does. The sound of jet planes, of sirens, et cetera. For instance now, if we heard sounds coming from the house next door, and we weren't saying anything for the moment, we would say that was part of the silence, wouldn't we?' says Cage in an interview (Kostelanetz, p.166).
I don't know if I would answer Cage's rhetorical question in the affirmative. Perhaps I would say that sounds were intertwining here with silence. But that is besides the point. The important idea Cage brings forth is that silence always contains sounds. Sounds as part of silence. Silence includes loud sounds. Silence becomes something other than itself. It becomes sound, the ambient sounds that the world is never without. Absolute silence does not exist; there are always sounds as long as we live and are able to hear them (cf. Silence and Death) . And music? Music itself is just an ideal situation because it would require us to ignore ambient sounds including undifferentiated or undesirable pitches and timbres (cf. Cage, 1961, p.32).

[3] Cage's music is made up of sounds, that is to say, both those that are written down and those that are not. The ones that are not written down appear as silences in the score, and open the doors of the music to sounds that are present in the actual setting. Hospitality. Cage's music as a host, inviting the stranger, the other, to enter its home. Cage compares his music to the glass houses by Mies van der Rohe (right) and the wire sculptures of Richard Lippold (left). The glass houses reflect their environment. 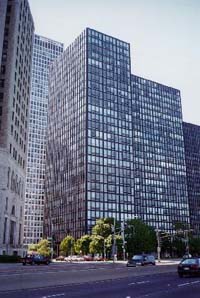 And through Lippold's network of wires one can see other things or people. These works revealed to Cage that there is no empty space, similar to the way he experiences the impossibility of empty time in his own works. There is always something to see; there is always something to hear. Even if we would so desire, we still would not be able to establish silence. Until we die there will be sounds (cf. Cage, 1961, p.7-8).
This idea, this silence, 'drones on' in Cage's most silent piece, (listen) . First, this composition implies that 'music' consists of all the accidental sounds in the room regardless of whether or not humans produce them. Second, what is written as a silent passage is actually filled with extraneous sounds (noise) because pure silence is physically impossible. Thus, all the music we hear consists of sounds that are both intentional and unintentional - not only what is written in the score, but also what is inadvertently produced in the auditorium during a performance of the piece. As such, the 'silent' piece, (listen) , refers to its alleged opposite: the 4 minutes and 33 seconds of silence exist because it cannot exist.

[4] The omnipresence of music in the modern world (cf. Macho) dis-ables silence, i.e., the time to think, reflect, and dream, the time to recuperate and to analyze. It makes silence suspect. In actual fact, the omnipresence of music results in a silencing of people through music: they are not allowed and are (therefore) unable to hear silence (noise). Cage's silent music returns the listener to this silence, these sounds, this noise. Listening begins with being quiet. After awhile, one notices that nothing is as loud as silence. (There exists something like droning silence.) In other words, music leads to silence, and silent music allows for loud sounds. Whenever we are engaged in silence we will encounter sound time and again. Silence is not other than sound, not separate from sound; it is not the opposite of noise. Silence is (a kind of) sound.
4'33'' forces us to rethink the concepts and our experience of music, silence, noise and sound. Could we then say that 4'33'' puts the terms silence and sound under erasure, sous rature? Could we say that we should put this binary opposition under erasure meaning that both silence and sound are inadequate to describe a more general play, a différance in/through which they function? (But can we speak here of a binary opposition at all? Maybe it would be more appropriate to speak of a quaternary opposition. Four terms can be considered here: silence, sound, music, and noise.) Or do we have to say that silence and sound are just the silent and sounding forms of the play of arche-silence? Arche-silence. Not a thing, not a presence, but the movement that produces the differences between music, sound, noise, and silence. A non-originary origin. For Cage, (the concept of) silence in music refers to all those sounds that are not intended, that appear as rests or general pauses in a score. What remains is the idea that no sound can be excluded from the domain of silence anymore. That is why we have to rethink silence. 4'33'' makes us rethink silence. As a piece of music, 4'33'' frames the silence, supplying it with a context, giving silence something to say. Music, 4'33'', gives silence sens. (I deliberately use the French term 'sens' here, referring to both meaning and direction.) Without music, without 4'33'', silence is perhaps lost, without meaning or direction and therefore un(re)presentable*. 4'33'' makes us hear the silence, makes us hear the noise within silence ('sens' also refers to the senses). 4'33''. A deconstruction in music, a deconstruction of the binary oppositions between music and noise, music and silence, silence and sound. A deconstruction of music by/in music. Music is most often opposed to silence or noise, and defined in terms of sound. Once the oppositions are deconstructed as 4'33'' does, it is no longer possible to define music either in terms of sound or in opposition to silence or noise. Not so much an act on Cage's part; deconstruction takes place in the piece itself. Cage's essays, lectures and interviews are (merely) verbal elucidations of this. Deconstruction takes place in the music. The music deconstructs. The music is deconstructed. Silence is deconstructed. And it took 4 minutes and 33 seconds.


* I thank professor Finn for putting my thoughts in this direction.