[1] Deconstruction. The name of a (former) band. They recorded a single album with the same name and then called it quits. The band never performed live. Members: guitarist/vocalist Dave Navarro, bass/vocalist Eric Avery (both were former members of Jane's Addiction) and drummer Michael Murphy. Before the release of the debut album in 1994, they had already disbanded as Navarro was enlisted by the Red Hot Chili Peppers. It was a dead band that had risen for a moment from the ashes of another dead band even before the first CD was released. (Click here for more information on Deconstruction).

[2] In one of the scanty interviews Avery granted, he says about the band's name: 'The word deconstruction applied to where I was at the time and also was prophetic about where I was going to be a year and a half later. It represented the demise of Jane's Addiction, the final break between David [Navarro] and I, and really signifies that I really am no longer in Jane's Addiction. That part of my life is really in the past ... The name Deconstruction fit instinctively without my knowing why. It seemed to dictate exactly what the experience was going to be about - not only in the relationship that I had with David, but how I made my music. It fits with deconstructive philosophy, but the choice was totally unconscious, not contrived or manipulated. We began to write songs, not paying attention to what was being put out as far as the alternate of sound' (my italics).

[3] Obviously, Avery is using the word deconstruction in its most literal sense, the junction of a negativism (destruction) and a positivism (construction), the combination of an end and a beginning, an end as the beginning of something new. Deconstruction is the solidification in (the name of) a band, the transition from the music of Jane's Addiction to something else, and finally, the change in a relationship (between Avery and Navarro when the latter prematurely left Deconstruction).
We have to wait until the last sentence to observe a new layer, another meaning, a shift from a more personal outpouring in which deconstruction finds its place and significance to a point where deconstruction takes on a musical meaning. 'We began to write songs, not paying attention to what was being put out as far as the alternate of sound'. Avery recalls he was no longer interested in making rock music per se, no coherent wholeness with regard to sound, as well as structure, in a rough rock style. Using the musical materials of the rock world (line-up, amplification, (use and function of) instruments, the contextual infrastructure of this music (sub)world), the band tried mainly to dismantle the formal structure of a standard rock song (verse-chorus-verse-chorus-guitar solo-chorus). A deconstruction on the inside from the inside.  To Avery, composing for Deconstruction meant putting together musical parts that do not work  together in order to see if a new relationship happens between them. (He compares his compositions with the paintings of collagist and creator of assemblages, David Salle. Salle juxtaposes iconography, objects, styles, and techniques from the antipodal extremes of high and low art. For example, in Landscape with Two Nudes and Three Eyes, he appropriates  an historical masterpiece of art by the Dutch master, Meindert Hobbema, with a picture of a nude woman in a provocative pose.) 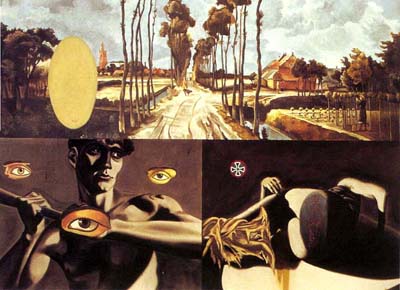 There is no cyclic structure in which the chorus often returns to secure the unity of the composition; one cannot hear a stylistically closed-off whole. The songs on the album, Deconstruction, are characterized by a linear approach, a sequential construction of different types of sound and music. Not a complete whole, but a principle openness, an essentially infinite succession of distinct sound-scapes or musical fragments (a ‘cut-and-paste monument’ as it is referred to by a review), more A-B-C-D than A-A-B-A. The illusion of a possible unity (it is always difficult to determine the boundaries of a text) is provoked by making musical dissemination the principle of composing.

[4] Avery: 'I did indeed have the abruptnesses intentionally in mind. It interested me to try making a record that mimicked the audio/visual randomness of daily life in any major metropolis. Like TV. I was thinking about how incredible the human faculty for making sense is. That we are able to make order out of the barrage of images and sounds that assault us all the time is amazing ... The record title refers to the post-modern architects and thinkers who played around with things being defined by what they are standing next to rather than by themselves. I wanted to try to pair up seemingly unrelated musical parts and see what kind of music would be produced'. This process, for example, lead to 'L.A. Song'. 'The first and second parts of 'L.A. Song' have no real connection, but the fact we put them together does make sense because we allow them to exist side by side', Avery says.

[5] To what is Avery referring when speaking about post-modern architects and thinkers? There is no further explanation, so we can only guess. But he uses these people, he uses some post-structuralist notions, to clarify (maybe to legitimize) Deconstruction's way of working. Avery is suggesting at least an analogy between the work of some academic philosophers and his ideas on composing. How do their theoretical explorations translate into a musical language? Maybe Avery is talking about this diagram:

The middle mark means nothing in-and-of itself. It has no essential feature, but gains its identity only through the difference from other elements in its system. The mark gets its meaning in a certain context, i.e., it is impossible for a mark to have meaning outside of a context. There is always context. However, no context can be entirely marked out and there are many contexts. Meaning is context-bound, but context is boundless. 'This is my starting point:', Derrida writes, 'No meaning can be determined out of context, but no context permits saturation. What I am referring to here is not richness of substance, semantic fertility, but rather structure, the structure of the remnant or of iteration' ('Living On. Borderlines', p.81). Meaning comes into being and changes through context; a mark means something in relation with other marks. (And why not call a musical part, a mark?) As the context, the environment changes (because of iterability, the possibility to repeat a mark in a different context), a mark does not get a non-meaning but a (partial) other meaning. The first and second parts of 'L.A. Song' did not have any prior connection; the musical parts came from different contexts, perhaps even different musical languages, but putting them together gave them a different meaning. (The middle mark in the diagram changes meaning depending on the horizontal or vertical way it is read.) Not a totally different meaning because each mark always already bears traces of other contexts within it. The different musical parts are at once related and unrelated. Like Deconstruction: freed from  the general concept of traditional rock music, but at the same time working with and within this tradition. An exteriority on the inside.

[6] The manner in which some musicians invoke (appropriate) Derrida’s philosophy of deconstruction has been shown here. Not only by using the name 'deconstruction'; departing from their music and texts a space opens where deconstruction appears in an altered form. Certainly less philosophical, maybe less profound, but, in any case, grafted onto an other discipline. No explicit imitation of Derrida's intentions and thoughts. Not only would it be impossible to translate a discursive language into a musical one, but it would also be a betrayal to the work in which he expresses himself.
Sometimes we encounter him without recognizing him.